skip to main | skip to sidebar

There is no god and I am proof.

Voiceover: Hello Thimble!
Thimble waves.
Voiceover: What's Thimble got today, children? Is it another of his magical sweets?
Thimble shakes his head.
Voiceover: Has Thimble got a train set?
Thimble shakes his head.
Voiceover: Is it Thimble's pet puppy?
Thimble slowly shakes his head, and draws a gun from his pocket. He just as slowly pulls the gun to his own head and pulls the trigger.
Voiceover: Thimble? THIMBLE?! He was so young kids. So damn young! (Begins to weep)
Cbeebies ident: And that's it for another exciting episode of Thimble. Next time, Thimble tackles Abortion, how it sometimes fails and why mummy cries when she looks at you.
Happy Bedtimes, children!
Posted by John at 22:25 124 comments:

The Good Proffessor Has News

Hello.
Am taking a break from treasure hunting to bring you an important update. My nemesis has found my artwork, the two headed poem, and intends to blackmail me. I think it would be best if you could track down the piece and secure its safety.
Thanks.
Posted by John at 22:10 No comments:

Games to be Played

It's a very simple mind game to be played with a friend. Obviously, like most mind games don't tell the person you're playing it with that you're playing.
Here are the rules. Try to get your friend to say the word "what". Time yourself doing so. Obviously the quicker the time, the better you are at the game. If your friend finds out you are playing, they will probably try to play with you and get you to say it. This is one of the many joys of the game.
Sketch Idea
Anthropomorphised keyboard. Get's typed on. The Keyboard is like the estate and the keys are like individual characters, so the space bar could be a slut or something, because she always gets touched? I don't know, man, I just come up with the ideas.
Peace out, home dawgs.
Posted by John at 22:05 No comments:

Yo, homeboyz! It's Grand Designs...in da hud!
I be turning dis old crack-den into a well bling whore house, holmes.
Alright, I can't do the way they talk, but if I do turn this into a proper script-idea, then I'll hire some gang-member to write it for me.
You know, because of all the bling I have in my house.
Posted by John at 22:02 No comments:

In he strolls, a pistol in his holster, a knife on his belt. He walks up to the counter and orders.
"Three gobstoppers, bitte." He orders with a slight German accent. The woman at the counter gasps. None have survived three, her eyes seem to say.
He takes his gobstoppers from the counter and then, in front of everyone, places each one carefully into his mouth. He chews each in a matter of seconds, without the slightest pain in his jaw. He slowly walks out of the Sweet Shop Saloon and glances around before remounting his horse.
These are the adventures of Baron von Iron Jaw. The new series this Autumn on BBC2.
Posted by John at 19:20 No comments:

Community Village - We have fooled you, technically this is a town.
Corporations - We're so evil.
Looooove Centre - Ain't no party that we ain't at.
When snails attack! Chairs! In Newark!
It's a riveting tale of snails attacking chairs in Newark. Laugh and cry along with Jeremy (the host) and you'll learn what real friendship is.
Posted by John at 17:47 No comments:

The Trial of Doctor Xeborc

Judge: Doctor Xeborc, you are charged with having a silly name. How do you plead?
Xeborc: Guilty, your majesty.
Judge: I sentence you to 10 years of getting disability benefits.
Xeborc: Oh. How horrible.
Xeborc is pleased at this news, because he intends to keep his current job as a marketing executive.
Xeborc is an evil genius. Emphasis on the evil.
Posted by John at 17:40 No comments:

Names for the City

Felt Town - Where everything is made of felt, except for the things in Felt Town.
Rustle City - Oooooooooh. I'm embarrassed.
InApr0priaTelY CapItalIsED CIty - It's aMazINg.
These are all ideas for the sketch show city name. Maybe the name could change? I don't know.
Posted by John at 22:52 No comments:

Standford. He stands alone.
Seriously, he wears a trenchcoat, sunglasses and a trilby hat. He stands under lamposts and phones people up. And tells them about himself.
There's a dark truth to Standford. He really does stand alone. Until he meets his new girlfriend, Cheryl. She completes him, and he no longer stands alone.
Also, before he meets Cheryl, he sometimes follows random people just to scare them.
Posted by John at 22:49 No comments:

It's a superhero who is a Bat, but also a platypus. I know, it actually hurt my brain how awesome this idea is. He has all the powers of a bat, and all the powers of a platypus.
GoblinTron. He isn't a superhero, but is a villain, Batypus's nemesis. He is a Goblin, who had an accident, and now his entire left side is robotic. He has an evil claw and a goblin hand. He has a small crime empire based in the town.
Another gang of supervillains, the Bungees. They bungee-jump around, into banks and things and steal stuff.
That's the main gang. Perhaps I'll add more. I don't think Powerful Man comes into this.
Posted by John at 22:41 No comments:

Powerful Man!
He flies in as a superhero, only to be taken hostage. On Earth, he is the most powerful superhero, with one horrible weakness. Aluminium, which happens to be the most common material in the earth's crust. So, terrorists constantly threaten to destroy him and take away Earth's only protector.
Powerful Man flies in.
Powerful: I have come to save everyone in this building, and arrest you terrorists.
Man
Terrorist: I've got an aluminium can.
Powerful: Again? How do you people know about my weakness?
Man
Terrorist: The adverts on telly.
Cuts to the adverts.
Man: Are you tired of being captured by Powerful Man?
Villain: Uhuh.
Man: Do you wish you could just strip him of his powers?
Villain: Sure do.
Man: Well now you can, with Aluminium!
Villain: Wow, Kevin, that's great!  And are you sure Aluminium, really works?
Man: Yes I am and if you're not satisfied you can always write to us.
Villain: But if it doesn't work, won't Powerful Man just have killed me?
Voicover: Aluminium! It really works. Paid for by Aluminium Mining corp.
Advert ends.
Powerful: I really hope they run out of money.
Man
He is hit on the head by an aluminium bar.
I can really see this character taking off. Not only does it showcase my own fear of aluminum, it lets everyone know about the dangers of advertisement.
Posted by John at 22:18 No comments:

Two words.
Banana Mayor.
Let it soak in. I know, I know. I may have just blown your minds, but hang in there. Because I'm about to blow them even further. The entire cabinet is made of various types of fruit.
Apple Councillor for Transport.
Pear Councilor for Business.
And so on with other fruit and positions in government. It's good.
Posted by John at 22:12 No comments: 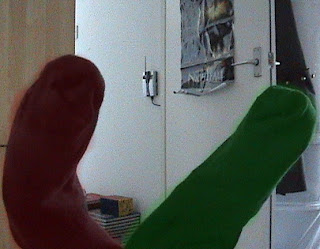 It's a sunday afternoon. You're sitting down. What do you want? Some sort of action gun-fight film? A hardcore pornography session? No. You want a nice comforting puppet show, and with Purple Splodge and co, that's what you get. Take a look at the pilot.
Purple: Hey, green and red, I just came back from doing heroine.
Green: That's great, purple.
Red: Yeah, me and green totally support your heroine addiction.
It turns out that Red and Green are hallucinations caused by Purple's drug use and latent schizophrenia.
Purple: I guess that's life.
And that will be broadcast at 4:15 pm on BBC One and then again at 5:30 am on BBC 4. For the clubbing crowd.
Posted by John at 16:37 No comments:

Ok, if you're reading this and you aren't me, I'd quite like you to leave. This is just a place for me to post my ideas, and I don't need other people reading them. Get out please.
Ideas begin now.
A new game that doesn't have a name yet, where you watch cars go past and work out where they're going and why.
A cartoon series about a foot surgeon called "Dr Feet". This is not a good idea.
Ideas end.
Posted by John at 09:54 No comments: